← back to
Whirlwind Recordings
Get fresh music recommendations delivered to your inbox every Friday.
We've updated our Terms of Use. You can review the changes here.

'Tales From The Jacquard' - Album Trailer

Tales From The Jacquard 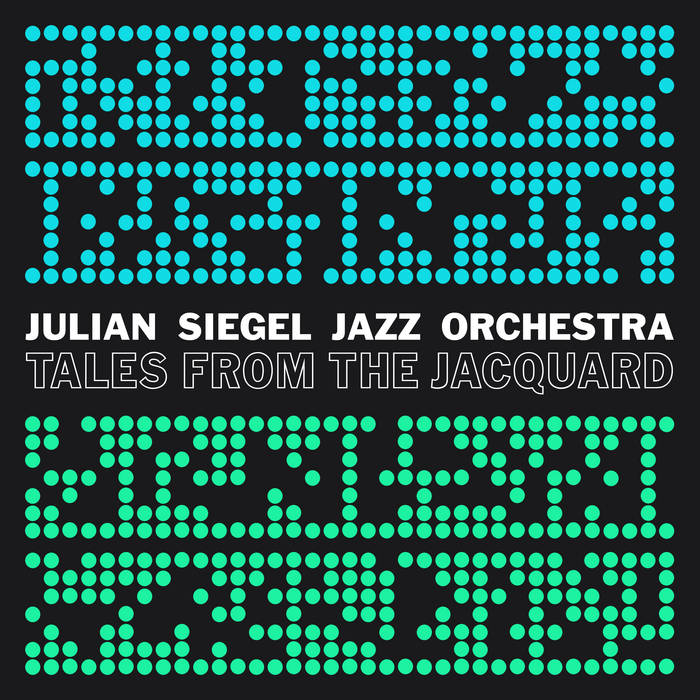 Tales from the Jacquard was commissioned by Derby Jazz. The band’s debut tour was produced by Derby Jazz and Right Tempo with grateful assistance and support from Arts Council England ‘Grants for the Arts’ and EMJAZZ.

Saxophonist and composer Julian Siegel is back for his fourth release on Whirlwind. Tales from the Jacquard is his most ambitious musical feat to date, assembling the stellar forces of the Julian Siegel Jazz Orchestra. Following the acclaimed Julian Siegel Quartet release Vista and the influential co-led Partisans album Nit de Nit, Siegel solidifies his reputation as one of Europe's most celebrated artists working across jazz and improvised musics.

Siegel has appeared as a member of some of the great large ensembles – he lists Hermeto Pascoal, Mike Gibbs, Kenny Wheeler, Django Bates and NDR Bigband amongst extensive performing credits. Now, the instrumentalist turns leader: Tales from the Jacquard is Siegel’s first record at the helm of a large ensemble. The album is a long time in the making – Siegel pairs ‘Jacquard’, a Derby Jazz commission from 2017, with a selection of charts originally written for small band arranged for the specially formed Jazz Orchestra.

On the half-hour ‘Tales from the Jacquard’, history fuses with technique. The piece is rooted in the East Midlands, where Siegel’s parents owned a lace-making business. “I have clear memories of trips to the lace factory with my Dad in the 1970's and hearing the sound of the machines – he wanted to conduct them! My Dad always had a great love for music and after work at home in Nottingham, Ellington, Basie, Sarah Vaughan, Lockjaw Davis, Paul Gonsalves and Ben Webster would be on the turntable as well as a lot of classical music. It seemed like a natural thing to try and explore the lace making process and use this research to inspire new music.”

Experimentation with Jacquard cards played a key role in his compositional process.“I was sent a single card by Cluny Lace, a long established Leavers Lace factory in the East Midlands. At the factory I saw the Jacquard machines with their sheets of punched cards transmitting the pattern to the lace machines. With more research, I was delighted to find musical possibilities within that card. The fact that each card contains numbers as well as rhythms gave me lots of musical ideas.” Having originally translated its card language into lace, the Jacquard now informs musical construction, creating melodies, rhythms, orchestrations and harmonic structures.

It’s a juggling act though, balancing the maths of the cards and allowing the band the freedom to have fun with the piece too. “I wrote for the improvisers in the band and tried not to prescribe the music too much and let the band play.” This translates into a hands-off approach to compositions, with ample room for exploration built into the forms.

This exploration continues with ‘Blues’, grounded by a heavy bass line over which Jason Yarde and Trevor Mires dazzle. ‘Song’ and ‘The Goose’ appeared on Siegel’s quartet album Vista and both get a full expansion here, opening up the structures for solo adventures from Mark Nightingale, Percy Pursglove and Stan Sulzmann. Sandwiched between them is ‘The Missing Link’, emerging from a dark opening into an energetic boppy swinger that features trumpeter Claus Stötter, invited over from the NDR Big Band Hamburg. ‘Fantasy in D’, the Cedar Walton standard, concludes the set energetically with a pared back arrangement – in this case, less really is more.

"Reveals the strength in depth of British jazz."
Financial Times

"A work of substance and originality which Siegel enthusiasts will cherish."
All About Jazz

"A beautiful balance between an open writing and more traditional pictures."
★★★★ All About Jazz (IT)

"An excellent recording with a great atmosphere."
★★★★ UK Vibe

"A joy of an album."
Simply Jazz Talk

"A terrific achievement from one of the UK’s finest player/composers."
Jazz Views

"Tales From The Jacquard is an essential record of a jubilant concert, and the premier of what will be seen as a notable work of British jazz."
London Jazz News

"Siegel's music looks for an equilibrium between the impressionism of current orchestras and the traditional swing bands."
Catalunya Music